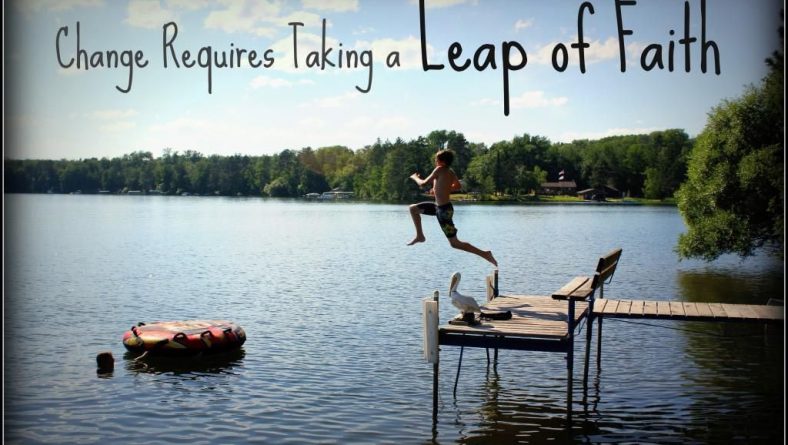 The Oxford Dictionary defines ‘faith’ as “ complete trust or confidence in someone or something”. Which, when put like that, sounds quite simple. That is until you put those words into action. Pause for a moment if you will and recall either a previous event, or current dilemma, where your blind courage is put to the test to take a leap of faith. ‘Blind’ because the outcome is uncertain, unknown and holds no guarantee of success.

Furthermore, there is no universal scale that measures the degree of courage required to take that leap, neither is there a definitive number of ‘leaps’ we can expect or when they may present themselves during our lifetime.

What is known is that we will approach them in our own way finding what works for us. Sometimes drawing upon the experiences of others who have inspired us, sometimes doing the polar opposite in an attempt to rebel or demonstrate our individualism. Whichever route we choose we make it personal to us and learn from our experience. I’d argue that there is far more to learn from a leap of faith that doesn’t go according to plan than one that’s a roaring success (but that opens up a whole new subject which I couldn’t do justice if I go off-piste in this blog!).

So what might qualify as a ‘leap of faith’? Forgive me, it’s late as I’m writing this and I have only myself to brainstorm with, but the things that come to mind include;

· Saying “I do” and committing;

· Breaking free from doing what is expected of us and instead doing what we want to do;

· Trusting a health professional and following a course of treatment;

· Facing a fear or phobia head on without avoiding it;

There will be many more and you will know what resonates with you, but hopefully this gives you enough to spark a personal memory.

Let me ask you, how did you take your leap of faith? Were you a ‘free faller’, an ‘abseiler’ or did you need a push? Or have you used a combination of all three in the past?

The ‘free faller’ represents the super confident, throwing caution to the wind and ultimate risk taker; the abseiler the person who wants to reduce, limit & minimize the risk; and the one needing a push might be temporarily frozen or paralysed with indecision and overwhelmed by the enormity of the situation. 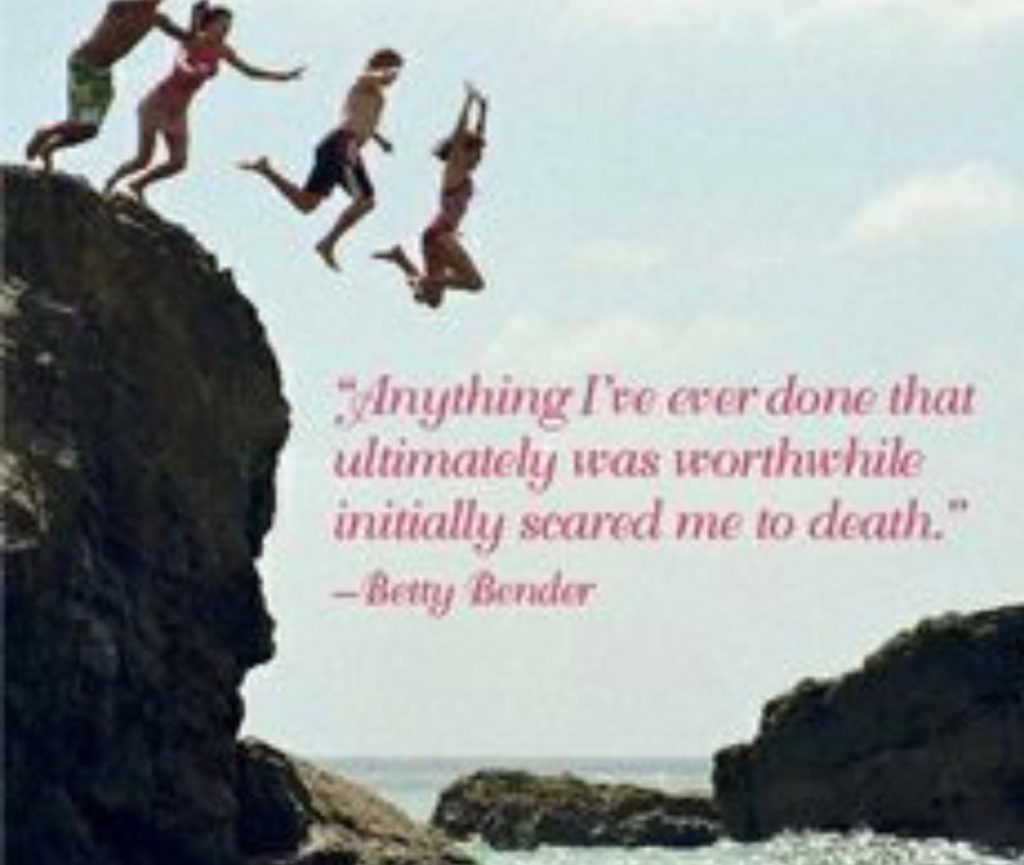 An example to demonstrate these approaches is a personal one, which involved me signing up to a waterfall excursion when on holiday some years back. We had trekked and climbed all morning up a series of wet and slippery rocks, going against the current of some minor waterfalls. When we reached the final destination, a magnificent fast flowing waterfall, we were told quite simply to “jump off”. The drop to the pool below was the height of two double decker busses. In addition, we were told that as long as we lunged far enough forwards as we jumped we would clear the jagged rock edges on our descent and would be sure to plunge into the middle of the pool where the water level was at its deepest. In that small gathering of twelve or so holidaymakers from different corners of the globe I observed a myriad of reactions.

There were the couple of guys who saw it as a challenge and ran to the edge, abandoning their fear stricken partners in their quest to be the first and launched themselves off the edge. They screamed with excitement, appeared to fly through the air with the greatest of ease, and landed in the water below. Annoyingly they spent the next 10 minutes shouting up to the rest of us saying, “It’s easy!” … “It’s amazing!” … You’ll love it!” … And then, as they grew impatient because our hesitation was delaying the barbeque lunch, we heard, “Get on with it, there’s nothing to it!” … “Just run and jump!” … “What are you waiting for?”

My reaction was something similar to …REALLY?! You seriously think that’s going to encourage me to jump?! And at that point I began to freeze. I became annoyed with the guys who had already done it and annoyed at myself for not realising sooner that there was only ever going to be one way down. My mind went into overdrive. Was I covered on my holiday insurance for jumping off waterfalls? Why hadn’t I asked more questions before booking the excursion? What exactly were the T’s & C’s I signed a couple of hours ago on a grubby sheet of paper they passed around the jeep? Would I be the only person to not clear the edge sufficiently, batter myself against the cliff edge and end up with a severe life changing injury? Had any one been injured on previous excursions and, if so, why are they still doing this? Am I the only one feeling so scared, or do others feel the same and are putting on a brave face?

Some teetered to the edge, took a closer look, asked the guide to repeat the instruction and assurance that the pool below was indeed deep enough and that no one had died in the past. This was encouraging for me as I no longer felt alone with my fear and I hovered close to the guide listening intently each time he repeated the same information.

Now amongst this group there were some more confident than others and it was truly endearing to watch people pairing up, encouraging others to take the plunge, and offering a hand to hold. Some of the pairings were between those who knew each other, but some occurred amongst complete strangers who until this day hadn’t met and didn’t even share a common language. That was magical to watch and it distracted me somewhat from my own fear.

Finally, I found myself left on the top of this craggy shelf with just the tour guide and one other woman. She too had been abandoned by her partner who had been one of the first to jump. We peered tentatively over the edge to see all the successful jumpers enjoying the cool water below, beckoning to us to jump and who were hungry for lunch. They were very much alive but that didn’t seem to convince us that we too could take this particular leap of faith.

And then it happened. Just as I asked the guide standing behind me for the umpteenth time to repeat the one instruction I felt a hard shove in the small of my back. He had literally pushed me off the edge! I think I screamed some expletive that cannot be shared here, and then instinct told me to take a deep breath and hold my nose. I hit the water, went under and then came back up. It was over. I had done it and, more importantly, I had survived! I could return home without that sinking feeling of having missed an experience but instead with a sense of achievement. But, I couldn’t have done it without the push, and I am so grateful because to this day I don’t know whether I could’ve done it without that push.

The other woman (who admitted afterwards that she had a massive fear of heights) was safely brought down via a series of natural rock steps that we had not been made aware of. The guide tied her to his waist to offer some additional security and safely delivered her to the waiting party below. She too left that day with a sense of achievement. Over lunch I asked the guide why he pushed me and not the other woman. He replied, “You looked more curious and I sensed that you really wanted to do it. ” He added, “Your friend had already jumped so you needed to do it alone.” And he was right, I did need to do it alone.

I learnt from this that there’s nothing more empowering than taking a leap of faith alone and in fact it begins as soon as we learn to move independently. Have you ever watched a baby learn to walk and seen the expressions of wonderment & surprise on their face? Or can you remember the first time you attempted to swim without floats, or ride a bike without stabilizers? Those leaps of faith felt huge at the time and, despite you being told you could do it, you had absolutely no evidence that you actually could.

So what holds us back from continuing to take leaps of faith as adults? Is it because we get stuck in a default setting peppered with self-doubt? Do we have beliefs imposed upon us by others saying we can’t do it? Maybe we’ve had our fingers burnt in the past and don’t want to experience that pain again? Or perhaps we are just too scared of failing, preferring instead the safe & predictable life options, which don’t come with high risk factors? Whatever it is I’m reminded of the quote by John Burrows ….

‘Leap and the net will appear’

So whatever it is that requires you to take a leap of faith I hope you find the courage to do it. If it appears impossible try breaking that negative word to create … im possible. As for the net … trust that it is there waiting and be ready to receive it in whatever form it appears. 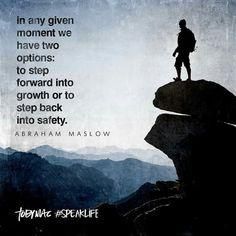